The rocks and landscapes of the Algarve house 400 million years of stories.

Vila do Bispo preserves some treasures with geological prominence in Earth’s History. On the west coast the scenic Ponta do Telheiro, in Sagres, besides an exuberant and colourful landscape, it also features geological phenomena of monumental rarity on a global scale that deserves a closer look. On the south coast, the dinosaurs left their footprints marked in the rock, easily observable in Salema beach, near Budens village. In Sagres, at Mareta beach, you can also identify diverse fossil records.

Mareta beach is excellent for finding paleontological fossils, mainly tracks of invertebrates of the Zoophycos type. These are traces of ancient organisms that lived in the depths of the sea. They dug tunnels in search of food, and when the tunnel was no longer viable, they would return to the starting point and dig another one. Zoophycos have a helix structure with a succession of curves radiating from a central point. In addition to these, other types of fossils may be found, or traces of their presence, such as ammonite fossils. In the central zone of the Mareta Beach, next to the pedestrian accesses, there is a large whitish rock, locally known as “Pedra do Sal” or “Salt Stone”. In fact, it is a rare coral reef fossilized in situ, that is, it is in original place, where it was formed. The weather was warm then and the water shallow. 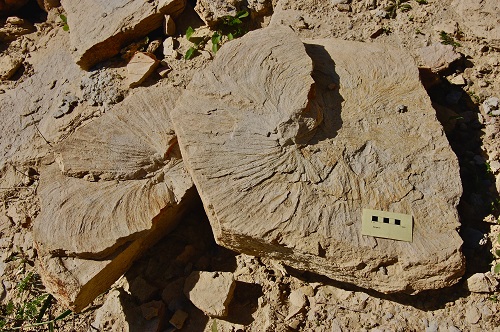 In addition to the incredible scenic and landscape value, the geomonument of Ponta do Telheiro is considered a geosite of reference on a global scale, due to its high scientific and didactic value. What really excites the scientists is its stratigraphy and Palaeozoic/Mesozoic angular discordance. The rocks here, shale and greywacke, show vertical folds and faults. Exceptional horizontal strata arise on top of vertical strata, giving a surface with obvious ‘T’ discordance, and a geological time discontinuity in the order of 90 million years, which corresponds to the time in which the existing mountain chain rose and was consumed by external agents. This is one of the most important geological sites of the Palaeozoic Age in Portugal. 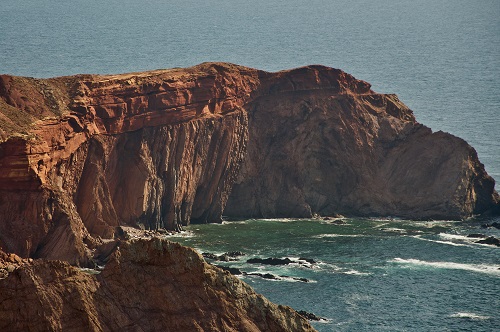 Salema Beach doesn’t only offer sun, sea and leisure to visitors. Its distant geological history provides contact with incredible paleontological features, notably dinosaur footprints made about 125 million years ago! At the base of the access stairway to the western end of this beach, on a limestone slab, we can easily observe a trail with several footprints of a large bipedal ornithopod herbivore. The footprints have 3 short, wide toes ending in a rounded shape. These ornithopod footprints are almost as wide as they are long. Dinosaur tracks are an important source of information about the morphology of the feet and hands of the animals that produced them, their locomotion, among others. 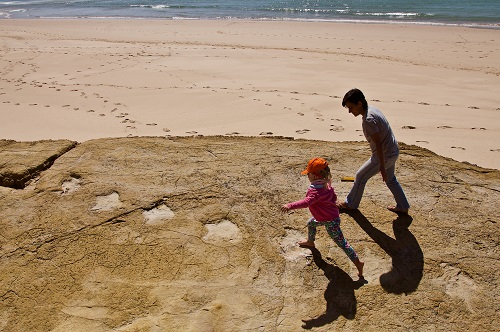 More about the nature around Sagres